This section is comprised of the Eleven editions of Liber OZ printed during Crowley’s lifetime, seven of which were printed by Crowley out of England and four by Agape Lodge in America.

There were two versions of the first edition of Liber OZ issued.  Both were printed by Apex Printing and identical in every way, save that one featured a picture of the Devil Atu, and the other, that of the Aeon.  300 in total were printed, 50 of the Devil and 250 of the Aeon.  A single sheet of paper, printed on both sides and measuring 7½” × 4¾”.  “Published by the O.T.O. at the Abbey of Thelema, Rainbow Valley, Palomar Mountains, California.  And at Hanover Square, London, W.1. An Ixv Sol in 0° Capricornus”—Published on the 21st of December, 1941. 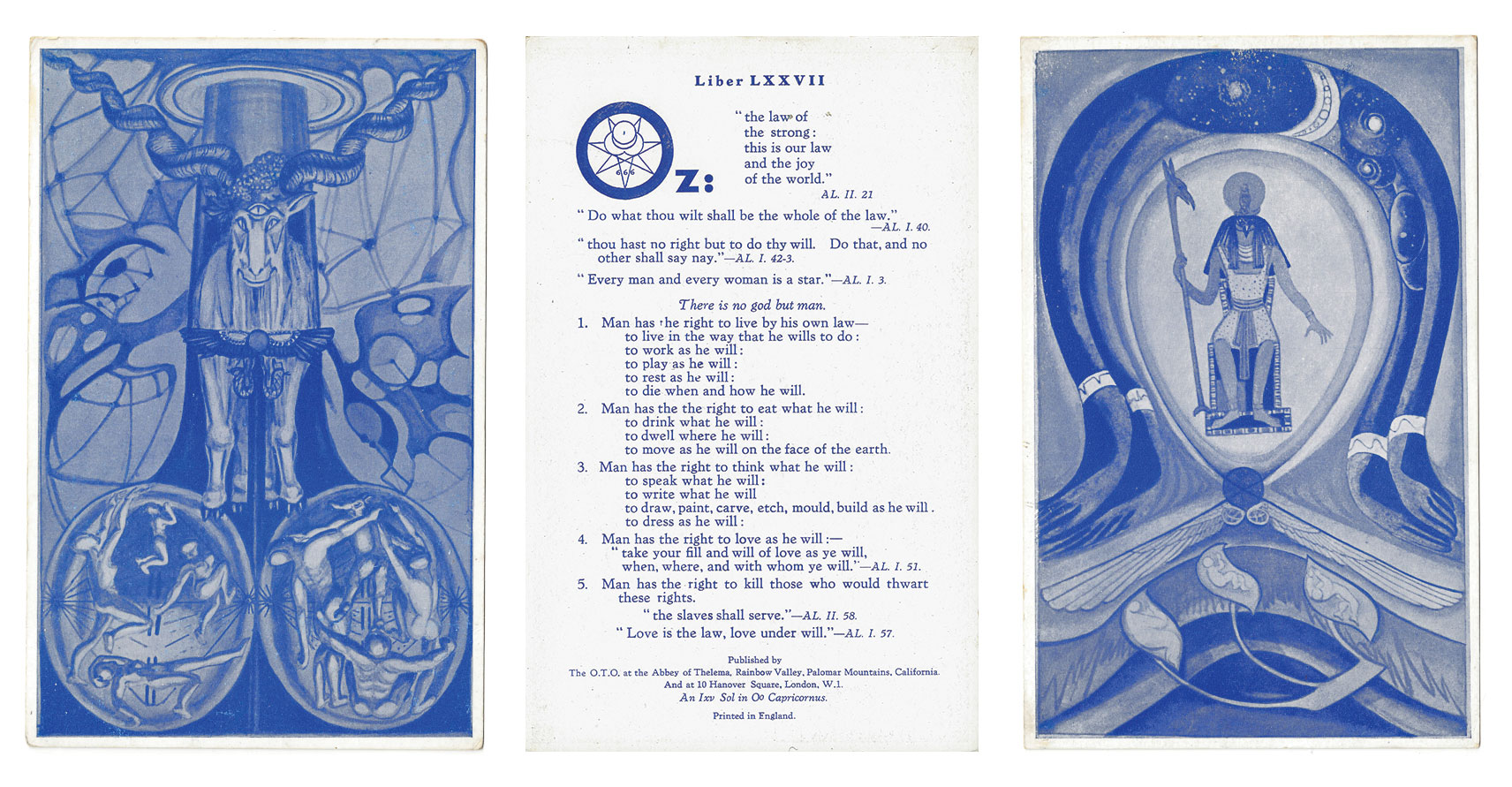 A single sheet of glossy paper measuring 9½” × 7¼”, printed in all black ink and folded once to make four pages.  Printed by Wilford Talbot Smith from the valley of Los Angeles, CA and published from the Sanctuary of the Gnosis and bearing the lamen of O.T.O. on its cover—5,000 copies were printed.  It lists the publication date as “An Ixv Sol in 0° of Capricornus” as per the first edition, but is known to have been printed at a later date—approximately on the 1st of February, 1942.

This first edition postcard featured a photo of Crowley wearing a white turban, with a caption that read, “Aleister Crowley , author of the V sign”. This is the first edition to include Crowley’s signature.  A single piece of thick paper measuring 6″ × 4¼” Printed by Chiswick press on the approximate date of the 15th of February, 1942 – London, England.

These two cards are identical save for the image.  One features a photo of Crowley with a large pipe, commonly referred to as the “North Sea Patrol”. The other, an image of Crowley sitting in a chair smoking a large cigar and include the caption, “Aleister Crowley , author of the V sign — Song of the Fighting French—Thumbs Up! etc., etc.”  Printed by Chiswick Press on the approximate date of the 10th of August, 1942 – London, England.  A single piece of thick paper measuring 6″ × 4¼”.

A single sheet of handmade paper, measuring 8 ¼” × 5 ¾” folded twice so as to form an envelope.  The second fold provided a one inch pre-gummed strip which was folded over to close the envelope.  When closed, one side contained Liber OZ while the other was left blank for address & postage.  When opened, the inside right page is blank for the inclusion of a message, and the facing left page contained a photo-graph of Crowley wearing a turban and smoking a pipe (The “Sahib”).  Printed by Chiswick Press on the approximate date of the 21st of March, 1943 – London, England. 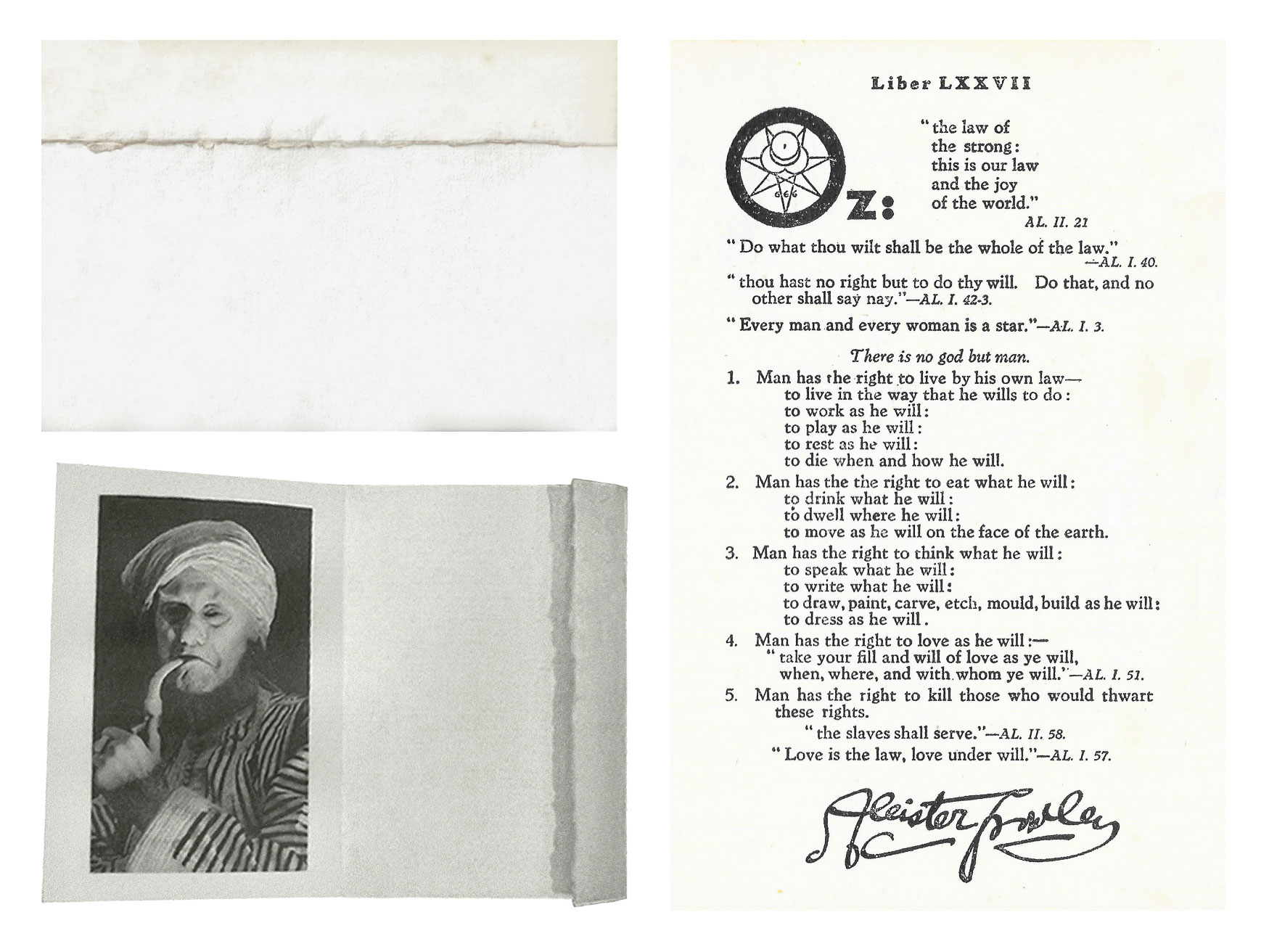 This marks the first occasion in which Liber OZ would be appended to another title.  Though bearing the date of the 21st of March, it was actually published on the 20th of April, 1943.  Printed on the finest mold made rag paper by Chiswick Press and limited to 200 copies.  Advertised as numbered & signed, though many were not.  Bound in thick gray wrappers, measuring 9¾”× 6¼” – London, England. 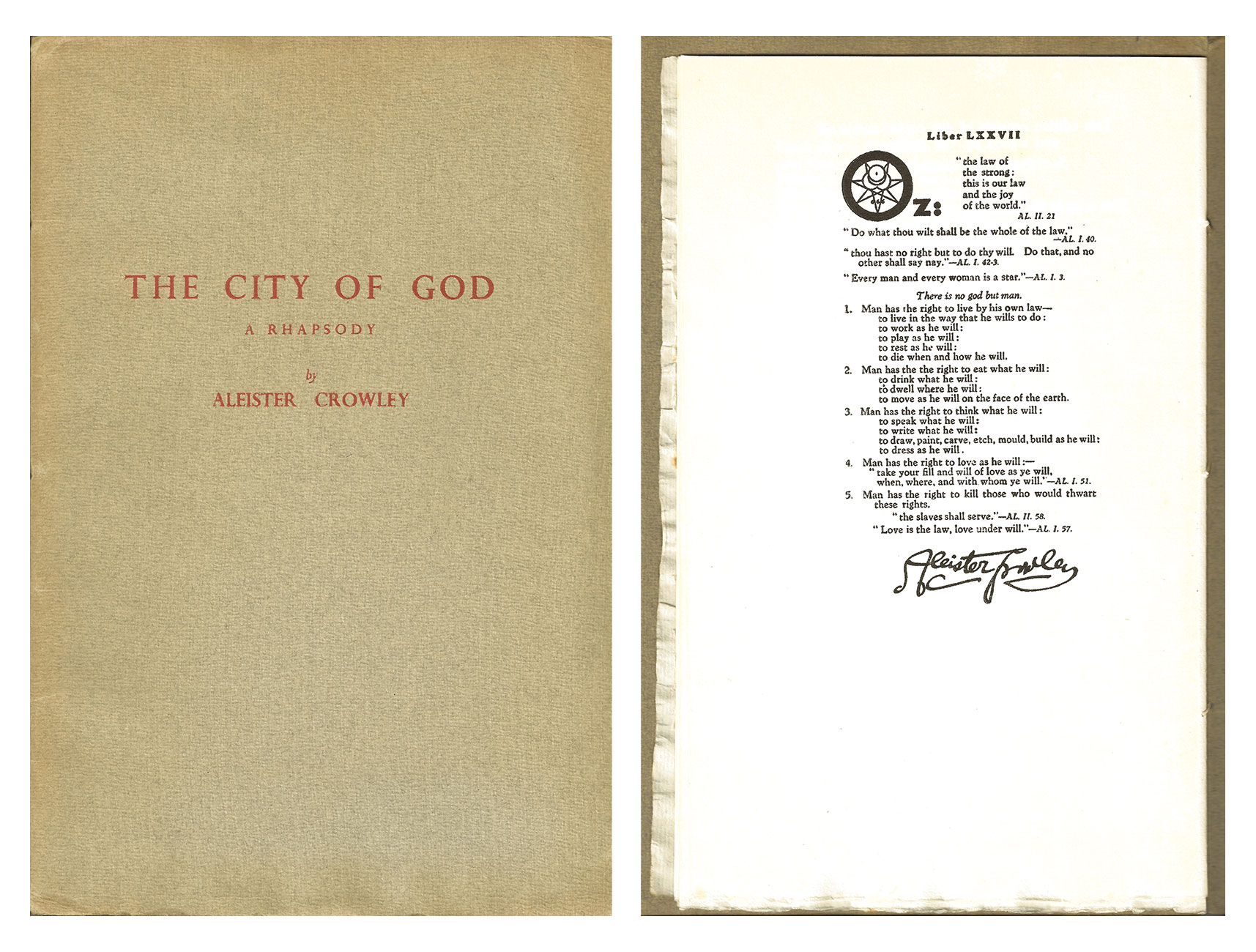 There were at least two variations of these cards printed by Agape Lodge out of Los Angeles.  One contains a single black line down the middle of the obverse side, demarcating room for address and postage, while the other card is blank on the obverse side.  It is believed that the edition without the line is the older of the two and based upon its scarcity, it more then likely had a smaller run.  It is also possible that there exists a variant of the earlier card with slightly rounded corners as pictured below.  In either case the earliest copies of these cards are dated to June of 1945.  A single sheet measuring 5½” × 3¼”. 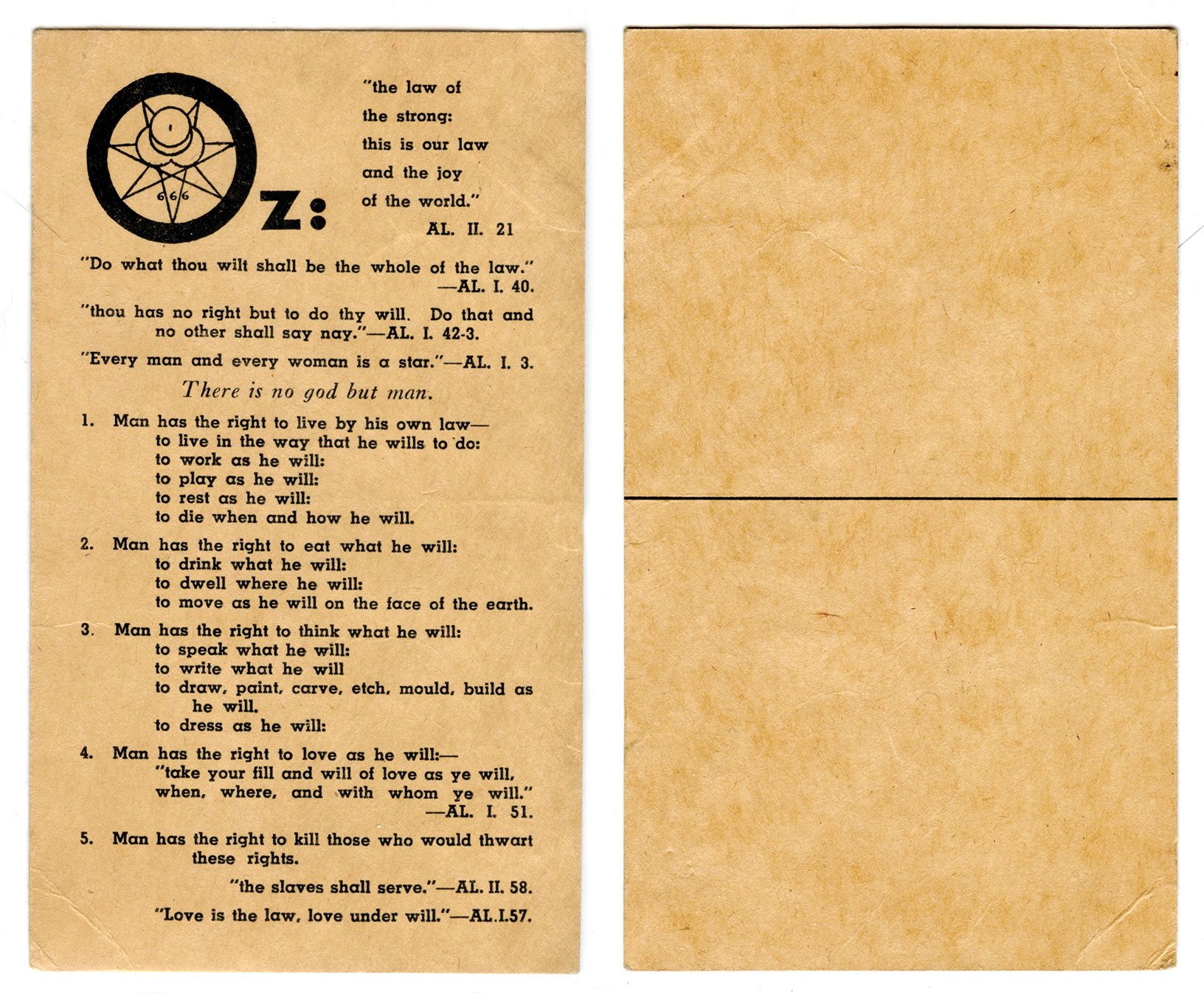 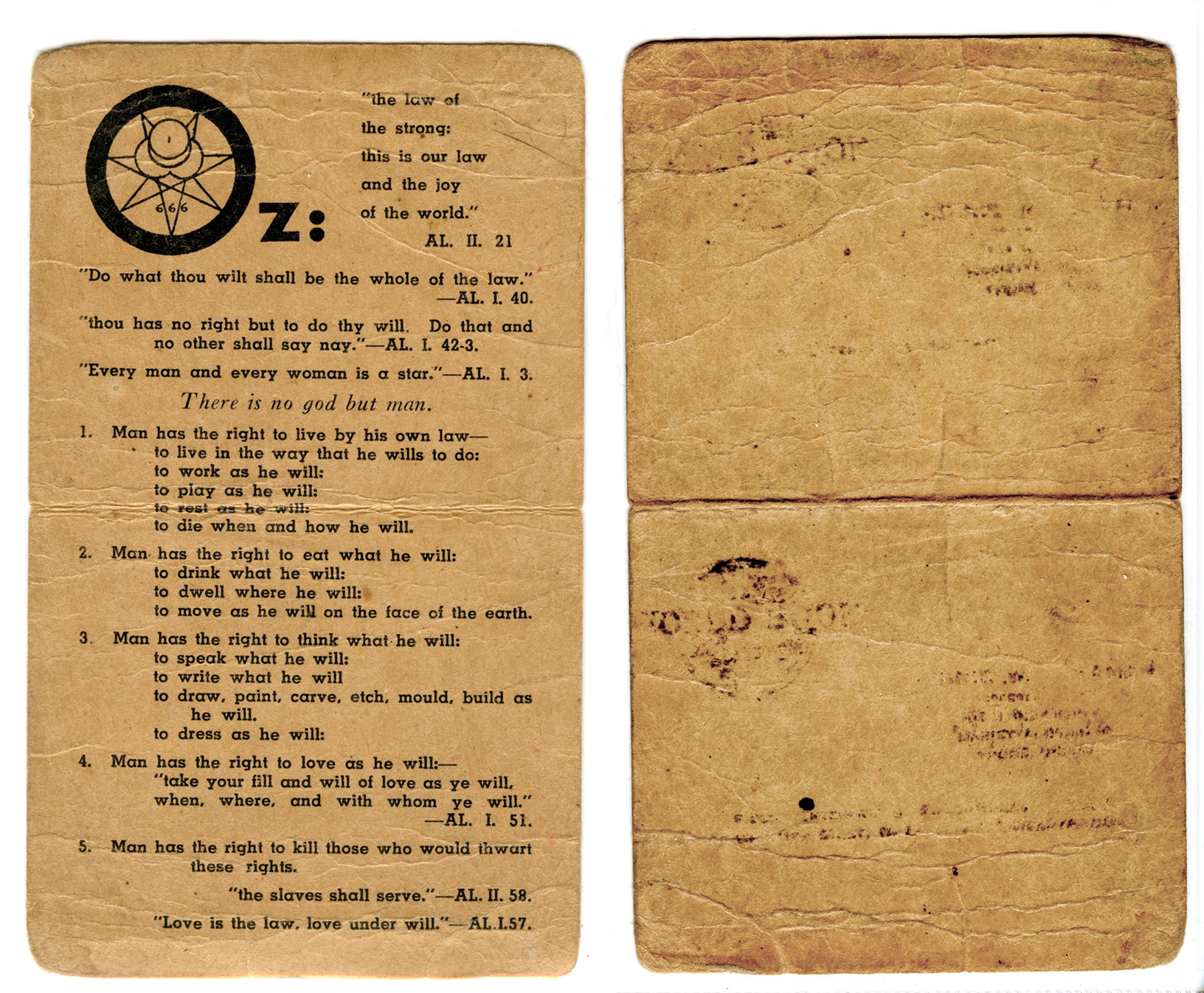 The final edition of OZ released during Crowley’s lifetime was issued in The Oriflamme (Vol. 1 No. 11) on the 21st of June, 1945.  Included in this volume was a brief introduction into the O.T.O. along with the Preliminary Pledge form, a short list of available publications, and a copy of the poem “Anthem” from Thumbs Up!.  This publication of OZ bears a distinction, in that W.T. Smith added a footnote to section 5 (“Man has the right to kill those who would thwart these rights.”) which directs the reader to “See 2nd Amendment, Constitution of The United States”—which is the right to bear arms. 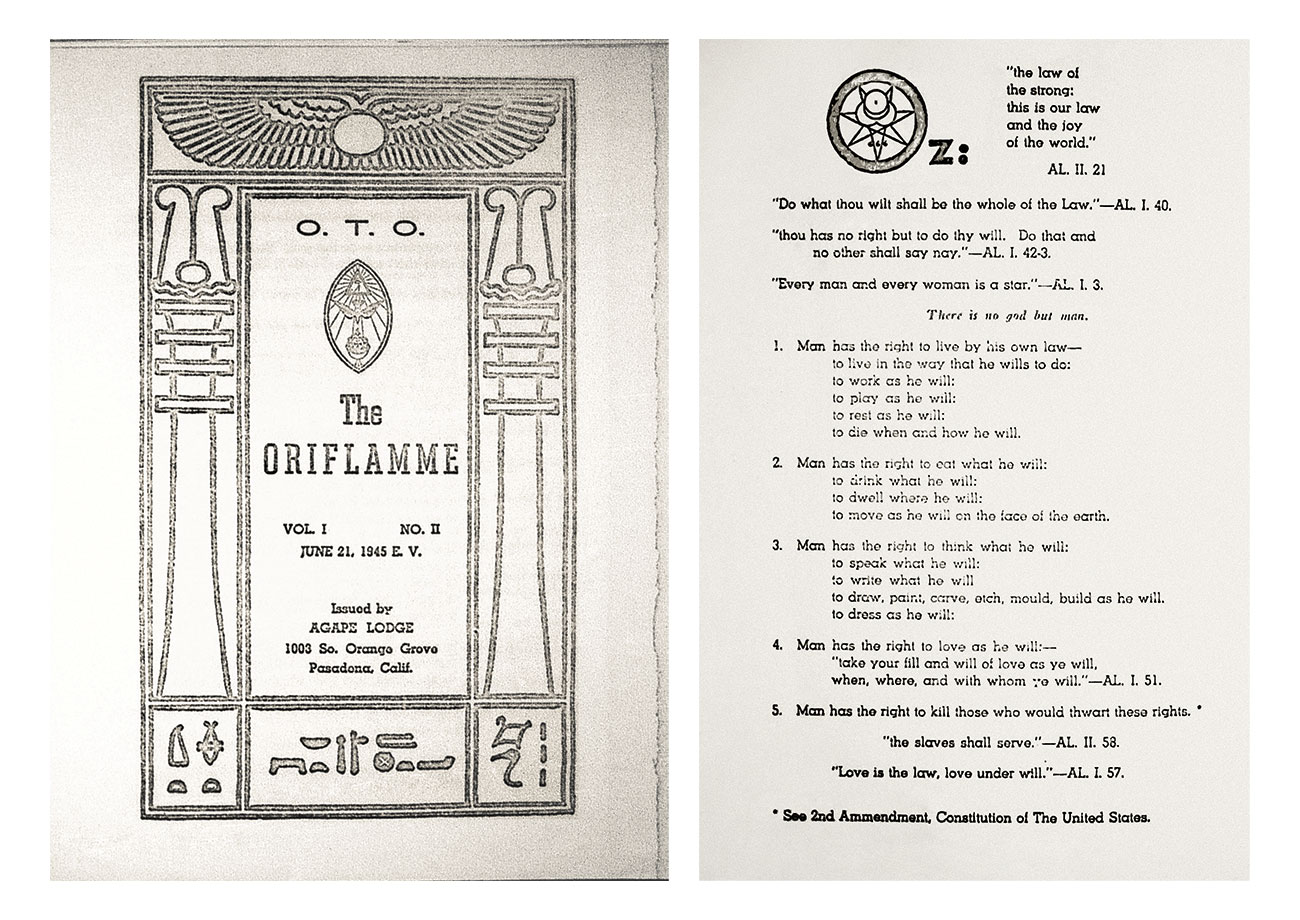